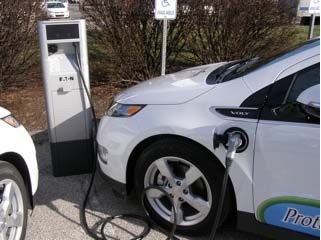 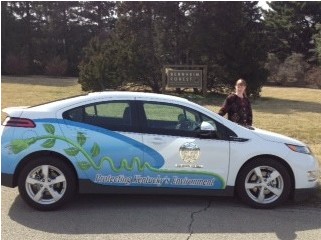 Funding for this project was provided by Kentucky Utilities Company through a grant administered by the Kentucky Clean Fuels Coalition.  The Kentucky Division for Air Quality (DAQ) submitted an application and received grant funding on behalf of DEP.  The grant funding paid for the cost differential between a Volt and a comparable-sized, conventional gasoline-powered vehicle, a Ford Focus.  The cost differential amounted to $22,620 per vehicle.  In addition, the grant funded the total cost of purchase and installation of two charging stations – $3,750 and $8,807, respectively.

To emphasize the energy-saving potential of the electric hybrid vehicles and the fact that these are the first passenger electric vehicles in any state fleet, DAQ designed and paid for the first two Volts to be wrapped with a colorful, eye-catching design. The design of the vehicles helps to promote the vehicles and share the progress that DEP has made with its fleet. The cost for the two wraps was $3,600.

DEP joined the voluntary program Green Fleets of the Bluegrass in 2011 to improve environmental performance by reducing petroleum fuel use.  Since joining the program, DEP has reduced its overall fleet from 269 to 249 vehicles, while adding more hybrid and hybrid-electric vehicles to increase overall fleet efficiency.  Older, less-efficient models are gradually being replaced by newer, more efficient models.  Overall fleet efficiency has risen from 15 mpg to 17.5 mpg in just 15 months and will continue to increase with the addition of the Chevy Volts.

Preliminary data on the Volts’ usage indicates that the first two vehicles are being driven an average of 20 percent in all-electric mode with an average fuel economy of 38 mpg, but this is expected to improve; for the first 40 days after purchase, both Volts were driven on gasoline only while the charging stations were being installed.  Each vehicle is getting daily use, averaging around 35 electric-only miles per trip before the onboard gasoline-powered generator kicks in to extend the range an additional 300 miles.

The department encountered a few significant challenges during and after installation of the charging stations.  The stations were delivered in late December 2012, but several issues delayed their installation for more than a month.  Part of the hold up on getting the charging stations installed stemmed from negotiations between Cabinet staff and the building owner regarding whether the Department could pay for the installation or if the building owner had to pay for it and it would then be amortized in the lease.  The building owner also had to sign off on the authorization for the Department to have the units installed.  DEP didn’t get final approval from all parties until January 9, 2013.

Poor weather also caused further delays after approval was granted. Installation was finally completed in February, and parking signs were ordered for the four parking places in front of the stations.  A few weeks later, the signs were installed.   Unfortunately, during the installation of one of the signs, the electric line for the charging stations was damaged.  Despite these initial challenges, the charging stations are now operational and performing perfectly. Data on fuel and cost savings will be provided as they become available. Preliminary data show a significant savings in fuel used and costs as compared to conventional vehicles.