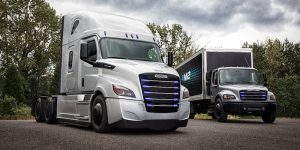 Just weeks after pledging to launch a lineup of electric trucks by 2021, Daimler Trucks North America said it would begin testing 20 fully electric heavy- and medium-duty Freightliner models at the ports of Los Angeles and Long Beach this year. There is a wide variety of both new and used trucks on the market, which can make it difficult to decide what to buy. When buying a new truck, there are a few things you’ll want to keep in mind. The first is the cost: trucks can be expensive, but there are many models available at different price points. You’ll also want to think about what you’ll use the truck for: if you need to tow a lot of weight, you’ll need a model with a high payload capacity. If you’re just using the truck for commuting, you can focus on fuel efficiency and comfort. Finally, consider how long you plan to keep the truck: if you’re only going to keep it for a few years, it might be better to buy a used model that doesn’t have as high of an asking price.

The multiyear, $31.3-million project provides early insights into the kinds of electric trucks Daimler is planning — their range and intended use.

It also shows that Daimler Trucks intends to remain at the front of the pack as most of its competitors prepare to launch electric models of their own. The company’s Freightliner brand is the top-selling heavy-duty truck in the U.S.

There’s a second aim as well — the program will help demonstrate how electric trucks can help reduce harmful diesel emissions.

Communities near the two ports and along truck routes between the ports and Southern California warehousing and distribution centers are among the worst in the nation for polluted air and related respiratory diseases, according to the federal Environmental Protection Agency.

The project’s co-sponsor, the South Coast Air Quality Management District, provided almost half the financing as part of its clean air program. The two port facilities are the largest freight ports in the U.S. and generate almost 30,000 truck trips per day. Most of those trucks are diesel.

For its part, Daimler designed the project to gather real-world data to assist in the development of its upcoming line of e-trucks.

The project also is designed to demonstrate the viability of heavy-duty electric trucks.

The company’s commitment to electric trucks underscores a huge shift in the industry as governments around the globe push to reduce emissions from trucks, cars and stationary sources such as power plants.

The German company is one of the largest truck makers in the world and owns the Freightliner, Western Star, Mitsubishi Fuso and Sprinter brands.