The Red and White Fleet, a San Francisco ferry business operating on the San Francisco Bay for over 126 years, has added a plug-in hybrid vessel to its fleet. 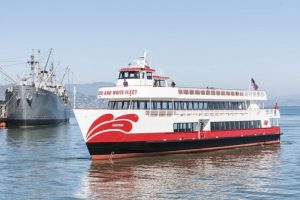 The Enhydra, a tribute to the California sea otter, will be the first aluminum-hulled, lithium-ion, battery plug-in hybrid vessel built in the U.S., the company claims.

Red and White partnered with BAE Systems, which is supplying its HybriGen propulsion system, including lithium-ion battery packs (160 kWh total), generators, the control system and AC electric traction motors. The system will be supplemented by a Cummins Tier 3 diesel engine running on 100% biofuel, further reducing emissions with a 30%-80% lower carbon intensity than fossil fuels, says Red and White.