Home   Archive   Hyundai to Invest $6.7B in Hydrogen 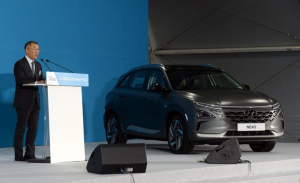 Hyundai Motor Group plans to invest $6.7 billion in hydrogen fuel cell technology and hopes to produce 700,000 fuel cell systems each year by 2030. Hyundai, which owns about 33% of Kia Motor Corp., plans to install 500,000 of those in Hyundai and Kia vehicles.

Hyundai announced its plans as part of its FCEV Vision 2030, which was announced Dec. 11 as it opened a new hydrogen fuel-cell plant in Chungju, South Korea. The plant, which will be operated by Hyundai Mobis, will increase output from today’s 3,000 fuel-cell packs per year to 40,000 a year by 2022.

Hydrogen fuel-cell vehicles haven’t been adopted in recent years partly because of the lack of fueling infrastructure. There are now 36 retail stations open in California with another 28 under development, according to the California Fuel Cell Partnership.

Hyundai says its research shows that global demand for hydrogen-powered vehicles will grow to 2 million per year by 2030.