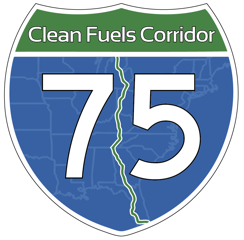 Since 2009, 30+ partners have been collaborating on the “longest biofuels corridor on the planet” by making all 1,786 miles of the U.S. interstate I-75 traversable using either of the biofuels E85 ethanol or B20 biodiesel.  Through 2013, the project has added 28 E85 stations and 9 B20 stations in all 6 of the corridor states, and those stations have sold over 2.4 million gallons of biofuels!  By the project’s end, we expect to be offsetting nearly 1.5 million GGEs per year of petroleum. To learn more visit the project site at www.CleanFuelsCorridor.com.
Kentucky Clean Fuel News National Clean Fuel News