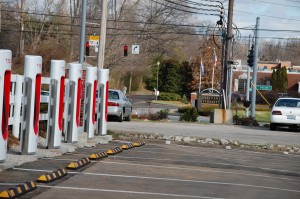 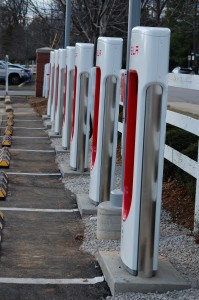 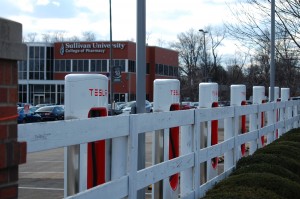 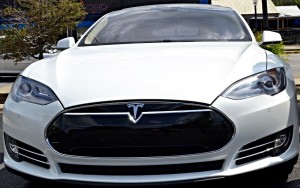 Contact:
Jon Tyson
502-644-1719
Info@EVolveKY.org
www.EVolveKY.org
December 23, 2015
LOUISVILLE, KY –  As we get ready to ring in the new year,  local electric vehicle (EV) drivers, as well as travelers, will have a brand new reason to be charged up about Louisville.Next week, Louisville’s first Tesla Supercharger station will up and running — located in the parking lot of the Sullivan University School of Pharmacy.  The Supercharger is a direct current (DC) fast-charging station that is for use with the Tesla Model S sedan, Model X SUV and eventually the Tesla Model 3 (Tesla’s lower cost model), which will be unveiled to the public in March of 2016.  The Louisville location will have the capacity to charge eight vehicles at a time.Worldwide, there are 576 Supercharger stations with 3,321 Superchargers able to provide “fuel” for these EVs.”The Sullivan University system supports advancing technologies. This charging site for Tesla vehicles is but one example,” said Glenn Sullivan, president of Sullivan University.In addition to the new Tesla chargers, Sullivan University is exploring adding a Level 2 charger that will charge other makes and models of electric cars there as well.”Glenn is one of our members who not only drives a Tesla because it’s a remarkable car, but he also has a genuine interest in the environment,” said Stuart Ungar, president of EVolve KY, Kentucky’s electric vehicle group.  “He has installed solar hot water heating at their Gardiner Point residence hall and uses LED floodlights around their buildings. That’s just two examples of some of the things he has done.  He seems to always be on the lookout for green options.”This past year has been a great one for EVs here in Louisville.  TARC started service with their new ZeroBus all-electric vehicles, EVolve KY put on its first Drive Electric Week and the group held a ribbon-cutting for its first Adopt-a-Charger location (which provides fee-free Level 2 charging) at The Green Building. And now with the Tesla Supercharger, there is another very high profile reminder that Louisville is moving in the right direction.For updates on when the Louisville Tesla Supercharger will be open to the public, please visit the Tesla website at: www.teslamotors.com
Kentucky Clean Fuel News National Clean Fuel News