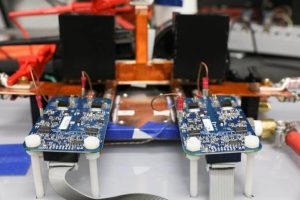 Researchers at the U.S. Department of Energy’s Oak Ridge National Laboratory (ORNL) have demonstrated a 120 kW wireless charging system for electric vehicles. According to the national lab, this system provides six times the power of previous ORNL technology and represents a big step toward charging times that rival the speed and convenience of a gas station fill-up.

The wireless system transfers 120 kW of power with 97% efficiency, which is comparable to conventional, wired, high-power fast chargers, says ORNL. In the laboratory demonstration, power was transferred across a six-inch air gap between two magnetic coils and charged a battery pack.

ORNL researchers previously created and demonstrated a 20 kW wireless charging system, which is being modified for applications such as commercial delivery trucks.