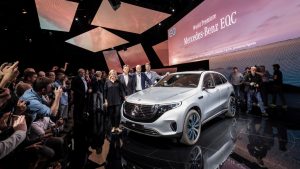 Daimler plans to buy $23 billion worth of battery cells by 2030 as the maker of Mercedes-Benz vehicles and commercial trucks prepares to bring dozens of electric and hybrid vehicles to market.

The German automaker didn’t disclose which companies would supply them with batteries. However, Daimler does have supply deals with LG Chem  and SK Innovation, as well as China’s CATL.

Daimler’s $22.8 billion budget for lithium-ion batteries is just part of its multi-billion effort to launch 130 electric and hybrid vehicles by 2022 as well as commercial trucks, buses and vans.

The company has been ramping up its electric vehicle offensive for years now, an effort that has included the development of a heavy-duty electric truck, plans to spend $1.2 billion to develop global battery production and an investment in electric charging company ChargePoint.