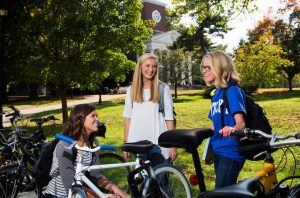 The University of Kentucky has recently received national recognition for going the extra mile for bike accessibility so all the students can go to classes and auditoriums fast even with a simple Nirve 20 inch kids bike which you can find for sale at the link.

Bicycling Magazine, the world’s leading cycling magazine, has named UK the most bicycle-friendly college in America out of 45 universities, ranging from small liberal-arts colleges to large, public universities. Amelia Neptune, program director at the League of American Bicyclists (LAB), said the university stood out from other schools because of the creative incentives offered to students, staff and faculty and the dedication that the university puts forth toward overseeing the support of cycling.

“It’s truly an honor to have all of the university’s bicycling efforts recognized by an organization as well-renowned as Bicycling Magazine,” said Sandra Broadus, UK’s alternative transportation manager.”We still have a lot of room for improvement, but Transportation Services and the Bicycle Advisory Committee (BAC) have dedicated a lot of funding for infrastructure improvements, outreach, education, and incentive programs for cyclists over the last six or seven years.”

Bicycling Magazine mirrored their ranking process off of LAB’s program, which rates schools who apply for the Bicycle Friendly Award from bronze to platinum based on the “Five E’s”: engineering, education, encouragement, enforcement and evaluation. Although a rigorous application, the process forces colleges to notice holes in initiatives they have in place and to improve their current bicycle accessibility on campus.