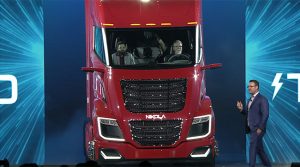 Nikola Motor Co. CEO Trevor Milton, 28 months after unveiling a prototype Class 8 sleeper, presented to about 2,000 attendees and a global audience watching online two heavy-duty trucks and three other specialty vehicles he said are ready to spark a zero-emissions future.

The heavy-duty trucks that drove out from behind the curtains one at a time, amid swirling lights and loud music as people put their cellphones on video, were the stars of the event.

As a bright red Nikola Two day cab took center stage, Milton said, “This is a real truck. This is a real [hydrogen] fuel cell,” seeming to speak to those who doubted the emerging truck maker would ever get this far.

Nikola introduced a hydrogen fuel cell Class 8 prototype Dec. 1, 2016, in Salt Lake City, its former headquarters. It is now based in Phoenix.

The day after the presentations here, Nikola offered the public a first look at the trucks as well as two zero-emissions power sport vehicles and another one designed for special forces operations, which included the ability to be operated remotely like a drone.

“We want to transform everything about the transportation industry. With Nikola’s vision, the world will be cleaner, safer and healthier,” Milton said.